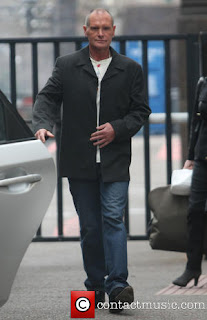 Paul Gascoigne has revealed that Wayne Rooney and Steven Gerrard paid for his recent spell in rehabilitation. The football legend makes a tearful appearance on Alan Carr's Chatty Man tonight (April 12, 2013), in which he reveals the extent of his drinking binges. "It's been three months since I had a drink. I do miss a pint...I'll never say never. I might drink again in the future," he told Alan.

Following his last drinking binge, Gascoigne said he "woke up with two empty litres of gin, six bottles of wine and about eight cans," explaining, "I don't plan to, I've got to keep my eye on the ball and do the right things. But I've got an addictive personality.For me it's just that I fancy a pint. I think I'll be alright for one and I get too excited. It's all right getting there but once I'm drunk I'm a nightmare."

According to the Daily Star, Chatty Man bosses removed all traces of alcohol from the set before Gazza arrived. A key part of the comedian's show sees him offers guests various garish alcoholic drinks. Alan's drinks cabinet was filled with fruit juice on this occasion.