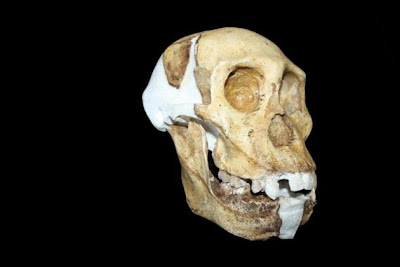 A part-human and part-ape-like creature that existed 2 million years ago in South Africa, had a pigeon-toed gait, human-like front teeth, and was an able climber, new research has found.

Researchers at Wits University in South Africa, including Peter Schmid from the University of Zurich, have described the anatomy of a single early hominin in six new studies.

The fossils discovered four years ago in Malapa near Johannesburg show a mixture of primitive features of australopiths and advanced features of later human species.

The researchers led by Prof. Lee Berger believe the new species is currently the best candidate for a direct ancestor of our own genus Homo.

“They show a narrow upper ribcage, as the large apes have such as orang-utans, chimpanzees and gorillas,” said Mr. Schmid.

Along with the largely complete remnants of the pectoral girdle, it has a conical ribcage with a raised shoulder joint, which looks like a permanent shrug.

The less well-preserved elements of the lower thorax on the other hand indicate a slim waist, similar to that of a human being.

Au sediba, like all the other representatives of the Australopithecus genus, had arms that were suitable for climbing as well as possibly for brachiation.

Its conical shape makes it difficult, however, to swing their arms when walking upright or running, plus they were a similar length to an ape’s.

“They probably couldn’t run over longer distances, especially as they were unable to swing their arms, which saves energy,” Mr. Schmid said in a statement.

An examination of the lower extremities shows a heel, metatarsus, knee, hips and back, which are unique and unprecedented. This inward turn distinguishes it from other australopiths.

Sediba was an experienced climber, which is shown by the remains of the upper arm, radius, ulna, scapula, clavicle and fragment of sternum found in Malapa.

These clearly belong to a single individual, which is unique in the entire previously known fossil record of the earliest hominins.

Based on the dental crowns the researchers assume that sediba does not belong phylogenetically to the eastern African australopiths but is closer to Auafricanus and thus forms a southern African sister group.

In the relevant differences the parts of the lower jaw appear most to resemble those representatives of early Homo.

An analysis of the cervical, thoracic, lumbar and sacral region of the spinal column shows that Au sediba had the same number of lumbar vertebrae as modern man.

“The numerous similarities with Homo erectus suggest that Au sediba represents the most appropriate early form of the genus Homo,” said Mr. Schmid....