Not fair! 'We Don't Deserve To Be 15 Points Behind United' Insists City Boss Mancini. 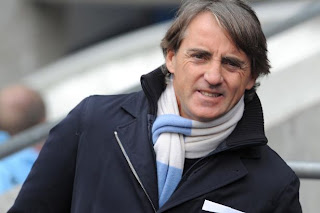 Roberto Mancini has claimed Manchester City do not deserve to be 15 points behind in the title race.

Manchester United hold the commanding lead over City, who travel to Old Trafford for the derby showdown.

But ahead of the eagerly-awaited clash between first and second in the Premier League, the Italian said the 15-point gap was not a true reflection of the gulf between the two Manchester clubs.

"We don't deserve to be 15 points behind," said Mancini.

"United have played very well and won a lot of games.

"They are unbeaten in their last 18 games in the Premier League. Their last defeat was at Norwich.

"So they deserve to stay at the top. But not by 15 points. It's not a true table.

"Now we have eight games left. If we play well and win a lot of those games, maybe we can reduce the gap. This should be our target at the moment."

City have no injury concerns going into the derby, with only Micah Richards and Maicon missing.

Mancini welcomed Yaya Toure's decision to sign a new four-year deal and commit himself to City for the remaining peak years of his career....