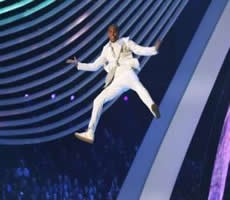 Since he’s happy to open up about his assault onRihanna in 2009, Chris Brown also wants the world to know that he’s a member of the Mile High club.

The 23-year-old popstar, who is on a promotions drive for his latest album Fine China, revealed that he once had sex in First Class while flying over Europe.

Brown shared this and other private details about his life on an episode of BET’s 106 & Park with host and fellow musician Bow Wow.

“I’m not trying to be nasty,” he said. “I was on a commercial flight in First Class.

“It was like one of them European First Classes where you’ve got the big front, so you can put the cover up so don’t nobody see nothing,” he said.

Brown had initiated the subject, asking Bow Wow to reveal the craziest place he had had sex, only for the tables to be turned on him. Bow Wow, in return, was a lot more coy in his response.

“I got to answer that? Man this is a family show, I can’t answer nothing like that man,” he said, and the female members in the audience, many standing up to hear the rapper’s answer, screamed in delight.

Brown scoffed at the rapper’s answer and played to the crowd.

“Alright, alright, ladies ladies ladies. Can Bow Wow do his thing in a back seat of a jeep with y’all? Y’all want it somewhere more extravagant, right?” he asked as the audience cheered.

The day before, Brown also opened up about his love life during a radio interview, squashing rumours that he and Rihanna had split up. Earlier this week, some gossip sites claimed that the pair were no longer together, and that Rihanna was in love with rapper ASAP Rocky....