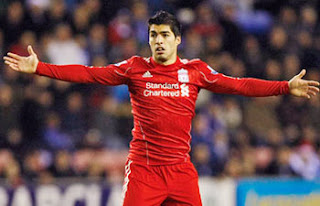 The bad boy from Uruguay, Luis Suarez, is back into the news after he punched Chilean defender Gonzalo Jara during a World Cup qualifier in Santiago on Tuesday. The Liverpool striker could face an extended international ban in lieu to his actions during the match.

Video replays showed Suarez making contact with Jara with a right fist to the face during Chile's 2-0 victory over the reigning Copa America champions, reports Xinhua.

The 26-year-old Uruguayan footballer was later booked by referee Nestor Pitana for an unrelated incident, meaning he will miss Uruguay's next qualifier away to Venezuela June 11.

Local media quoted a FIFA spokesperson as saying that football's governing body was awaiting the referee's match report before deciding whether to take action against Suarez.

"We are still collecting all the post-match international reports since the officials have got 24 hours to send them. Based on (them), FIFA will proceed," the spokesperson said.

The top four teams will qualify for next year's World Cup finals in Brazil.
Posted by Unknown at 07:13