Prostitute Who 'Died' During Sex Comes Back To Life. 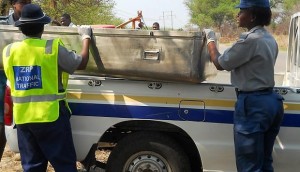 A  prostitute in Zimbabwe ‘died’ during a hotel romp with a client – only to come back to life as her body was being put in a coffin.

The vice girl reportedly collapsed during a sex session last week at the Manor Hotel in Bulaweyo.

Convinced she was dead, her shocked client called the police – who sent paramedics to collect the body.

But as they were loading the ‘corpse’ into a metal coffin, the hooker suddenly woke up screaming.

Terrified staff and guests at the hotel who had gathered to watch the scene unfold, fled in panic.

A source said: “It was like a movie. People were running away in different directions. It was a scary incident because we were all convinced that she had died because she was just cold. Miracles surely do happen.”

The shaken hooker – known locally as MaNdlo – was escorted home by another prostitute.