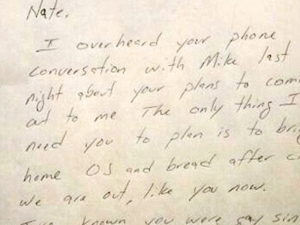 Nate's coming out conversation was preempted by his father, who wrote a note explaining that he had known his son was gay for years.

"I overheard your phone conversation with Mike last night about your plans to come out to me.

"The only thing I need you to plan is to bring home OJ and bread after class. We are out, like you now. I've known you were gay since you were six, I've loved you since you were born."

The letter ends: "P.S Your mom and I think you and Mike make a cute couple." 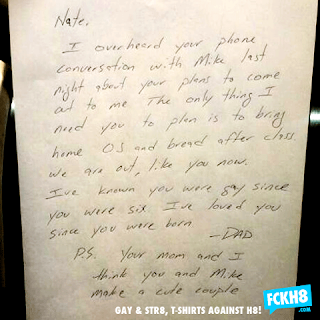 The letter appeared on the Facebook page of an anti-homophobia organisation, FCKH8.com, on Friday and has been liked by over 78,000 people and shared more than 42,000 times.

People posted comments about the letter, saying it   "brought tears to my eyes" and "if only all parents were so loving".

FCKH8.com founder Luke Montgomery told Yahoo that the letter was emailed to them by Nate, and that it had brought tears to his eyes.

The letter has been picked up by organisations around the world including the UK's Telegraph,  Huffington Post and Daily Mail.

It comes after The Definition of Marriage Amendment Bill that would legalise same sex marriage secured two thirds of MP votes in Parliament this week
Posted by Unknown at 15:38