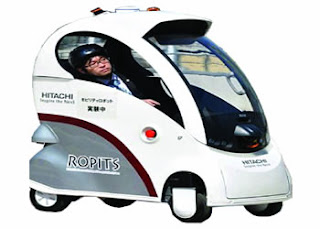 Japanese inventors Japan have developed a single-passenger car that can automatically take passengers from a location to the other without them having to do a thing.

The country’s tech conglomerate, Hitachi recently revealed its new Robot for Personal Intelligent Transport System (ROPITS) in the city of Tsukuba in the Ibaraki Prefecture.

The Jeremy Clarskon personally-designed robotic car has been described as the world’s smallest car.

The one man mobility robot can pick-up and drop off a passenger autonomously, while, in emergencies, passengers can seize control of the vehicle using a joystick controller in the cockpit.

The car maker said the vehicle was originally developed to help those who have difficulty in walking.

There is presently an increasing number of people in Japan’s ageing society and the car was designed to be small enough to move through pedestrian spaces.

The car was initially unveiled in February on the first episode of Top Gear’s most recent series.

When tested on the road, the four-wheel vehicle hit 34mph at one stage as could weave around traffic in the tiny vehicle.

Speaking about the car, carmaker Clarkson said: “I’m just staggered that Ford, GM, Toyota, all of the automotive giants haven’t thought to make a car like this yet.”

The Japanese robot is equipped with GPS to allow it to find its way, as well as laser distance sensors to look out for obstacles and a gyro sensor to help it stay upright while negotiating uneven ground.

Passengers need only specify their desired destination on a touch-screen map and the machine will automatically drive them there.

Similarly, anyone who needs a ride will be able to call a Ropits vehicle from any number of computer-networked  “stops” dotted around the city.

The vehicle is also equipped with “active suspension” which controls each wheel individually to enable it to tackle curbs and uneven ground while keeping passengers comfortably upright....