Lagos State NSCDC Commandant Suspended Over “My Oga At The Top”. 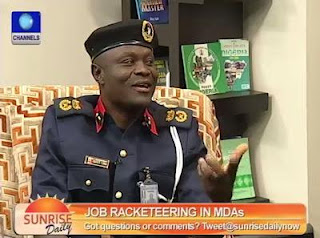 According to unconfirmed reports reaching Dailytimes,  the Nigerian Security and Civil Defence Corp (NSCDC) has suspended the Lagos commandant of the NSCDC, “My Oga at the top” celebrity Mr. Obafaiye Shem.

His suspension comes on the heels of his now famous “my oga at the top” comment which went viral after his embarrassing ordeal at the Channels Television breakfast programme – Sunrise Daily.

According to sources, his suspension was ordered from the Ministry of Internal Affairs.

In the interview,  the Lagos Commandant couldn’t mention his organisation’s website name and the name of his boss.

Mr. Obafaiye Shem tried to cover up his ignorance of his organization's website by saying that it would be revealed by his "Oga" at the top.

This video apart from its being a comic relief to the entire country and beyond this past week, it has  sparked a T-Shirt campaign, a music video and a remix tape...