Who Wants To Be A Millionaire?: Nigerian Teacher Wins N5Million 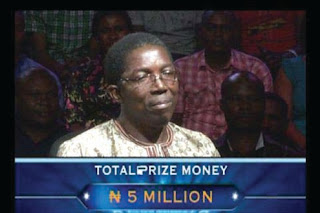 A teacher, Mr. Sammy Davies Abraham, has received his reward on earth by winning the sum of N5 million from the MTN sponsored Who Wants To Be A Millionaire (WWTBAM) television game show. The Livingstone Preparatory School, Ibadan teacher won the prize on Sunday night.

As a member of Deeper Life Bible Church, Abraham confessed after winning the prize that he didn’t have a television set until about four years ago when a friend sold one to him for N3,000.

“Some years back, we members of Deeper Life weren’t watching television. But about four years ago, a friend of mine gave me a television and video player and said I should pay just N3,000 for them. That was how I got a television. Even after getting it, I really didn’t watch it because I was not really used to gadgets like that. But later, we started watching it and I came across the programme, WWTBAM,” he said.

Abraham, 58, who graduated from the Evangelical Presbyterian Teachers Training School, Ghana, in 1975, added that his wife and kids persuaded him to participate in the television show produced by Ultima Limited.

He said: “I usually watch the programme at home and most times, get the questions correctly. So, my wife and children said instead of wasting my knowledge, I should enrol to participate in the show. That was what motivated me to start dialling 132. Though I once participated in the home quiz and won N20,000. That was about two years ago.”

He further told P.M.NEWS that the money he won from the TV game show will be invested in the establishment of a school, which has been his dream for many years.

“Now that God has answered our prayers, the whole amount is going into the project.”
The elated father of four, who has been married since 1993, confessed that the development is a great relief for him, and a testimony to the fact that teachers can actually get their reward on earth.
Also speaking with P.M.NEWS, his wife, Mrs. Clementina Ngozi Abraham, said: “I want to thank Ultima Limited for what they are doing. More power to their elbows for giving people the opportunity of getting to where they never thought they would be.”