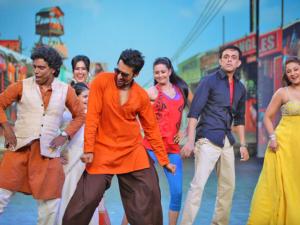 The upcoming film Rangrezz, starring Jackky Bhagnani, is already hitting all the right notes with audiences, largely because of its incorporation of popular song and dance numbers that are taking the world |by storm, namely Gangnam Style and the Harlem Shake. Indian reporters examine how these modern hits are incorporated into the film.

IT’S common knowledge by now that Jackky Bhagnani has acquired the rights to the popular song Gangnam Style by pop sensation Psy. The track, which has been used in Bhagnani’s soon-to-be-released film Rangrezz, has created a stir among audiences.

Bhagnani and Niharika, Bhagnani’s stylist, and Prasanna, the track’s choreographer, decoded their use of Gangnam Style.

Niharika said: “Because the song has already been a rage and people will expect something crazy where costume is concerned, we had to think out of the box in keeping Jackky’s look in the film.

“He plays a lower middle-class Marathi boy, which had to be factored in. At the same time, it had to look colourful and funky on screen. It had to make a statement as well, after all it’s Gangnam Style.”

On changing the steps in the new track, Bhagnani said: “We have chosen all iconic places around the city (Dhobi ghat, Mumbai). But we did not want to give a touristy feel through this song. It had to be from the eyes of a local boy, who has hung around in these places.

“Gangnam Style in Rangrezz had to paint a completely different picture as there is a huge recall of the international song, the video and Psy’s act. What we have captured is also close to the character I am playing,” he said.

“Dhobi ghat was a specific choice because it’s iconic to Mumbai and visually its colour palette can be sheer joy. We shot at the docks, Worli village – all these places have their unique characteristics which, put together, make Mumbai.

“We have also used an open bus to bring out the fun quotient. The entire song is a slice of ‘Mumbai life’ from a local’s perspective. Gangnam Style in Bollywood will be for one and all,” said Bhagnani.

About its choreography, Prasanna said: “We’ve introduced the Harlem Shake in this song, which is a hot property dance these days, so both in terms of song and dance it is a global merger – ‘Harlem Shake in Gangnam Style’.

“Also, Jackky is a fab dancer, so along with giving the song a fresh look we wanted to tap into his talent as well. The song looks warm, colourful and will include every-body, from a child to an ‘oldie’.”

Rangrezz, directed by Priyadarshan, features Priya Anand opposite Bhagnani and is scheduled for release on March 22.

The man who is considered as a “lucky mascot” by some of the bigger film houses in Bollywood, Mushtaq Shiekh (writer), returns after a break with the thriller.

Rangrezz is the remake of the cult classic Naadodiga and tells the story of three friends who go out of their way to help a friend get his love back. And when they see things not working out between the couple, they take another daring step.....