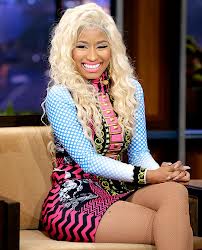 This story contains information about a show which is yet to be broadcast in the UK.

Nicki Minaj has taken a shine to one of the teenage contestants on this week's American Idol, which was broadcast on US TV last night.

The rapper told 17-year-old Charlie Askew that she was "obsessed" with him as she and her fellow judges worked to narrow down the remaining men in the contest.

Charlie told the panel: "I chose this song, because well, there was a girl. There always is. I still love her. I just hope I don't end up being somebody she used to know."

"Such a smart intro," Nicki told him after he had performed Gotye's Somebody That I Used To Know. "Charlie, I am obsessed with you."

And she continued: "Today, you became an artist in my eyes. You have this quirky thing that is so odd, it's right.

"You are so, so special. I like your sneakers. I like that they make no sense. Don't change, wear your big oversize suits. I love you."

And after Keith Urban told him "Nicki likes you", Minaj added: "I'm going to eat him."

The episode saw the remaining 43 men cut to 28, so there was plenty of disappointment - with contestants including Nicholas Mathis, Matheus Fernandes and Papa Peachez getting their marching orders.

Next week's show will see another eight contestants chopped, to produce the final 20 men....
Posted by Unknown at 12:21