Whitney Houston To Be Honored At Clive Davis' Pre-Grammy Party. 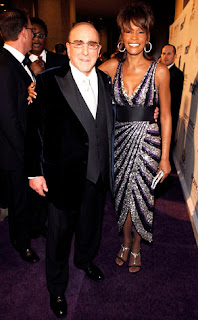 It will be one-year ago on Monday that Whitney Houston passed away. She was found in her room at the Beverly Hilton Hotel just a few hours before Clive Davis and the Recording Academy's annual pre-Grammy party was to take place just four floors below in the International Ballroom.

The party went on with Davis telling guests it's what the late singer's family wanted.

Davis will once again hold court on Saturday for this year's soiree in the same ballroom. While he had been telling press that he wasn't sure if he'd pay a special tribute this year to mark the anniversary of her death, it turns that plans are not only in place, but members of Houston's family will be in attendance.

"She was this generation's greatest, greatest singing talent," Davis told E! News earlier today. "So we'll do something over the course of the evening Saturday night to show that."

Davis also said, "It's very much with me and she'll be with me."

Houston's brother and half-sister, Gary and Pat Houston will be at the bash, a source confirms to E!. "We're going in support of Clive to show our appreciation of him as he honors Whitney," Pat told the New York Daily News.

However, Houston's mom Cissy Houston declined an invite to the party, telling Access Hollywood, "I got an invitation to the party, which is the most obscene thing. I don't know why they would want me to come to the party in which she died, you know? Unheard of."

Meanwhile, Davis said there's only one singer right now who reminds him of Houston. "The best voice out there today of the younger performers is Jennifer Hudson," he said. "There's really nothing Jennifer can't do."

Davis gets the biggest names in the music biz to perform at the party. Houston, Hudson, Alicia Keys, Pink, Fergie, Christina Aguilera, Usher, Mumford & Sons, Kelly Clarkson and Jamie Foxx are just a few of the more recent artists who have been on the previous lineups.

While Davis is keeping mum on the upcoming lineup, we do know that five-time Grammy nominee Miguel will be performing.

"You want them to be proud," Miguel says of the legendary artists who will be in the audience. "You want then to be proud of you so it's a bit of pressure. But I love what I do so I welcome that."....