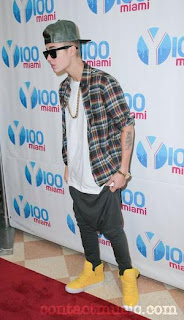 Is Justin Bieber getting too big for his boots? According to New York Daily News, Bieber’s behaviour is getting a bit too much to handle and is threatening to ruin that squeaky-clean image that they’ve all worked so hard to construct around him.

“Justin doesn’t seem to care (that his career may be in jeopardy) and does whatever he wants,” an insider told NYDN and added “he doesn’t listen to anyone.”

Top of the list of Bieber’s behavioural crimes seems to be that he’s smoking weed all day and “orders everybody around.” It doesn’t help, it would seem, that he is surrounded by people who “say ‘yes’ to anything he wants.” All in all, it sounds like Bieber is finally being exposed a spoilt brat, after years of being portrayed as an angelic young role model – the kind of kid you’d be happy for your kids to bring home.

Well, that illusion is well and truly starting to shatter and one source says “This could really damage his reputation if they don’t get it under control. Justin is someone young teens look up to and this kind of behavior can really hurt his career. Just look at what happened with Britney Spears.” What? he might shave his head and then be asked to judge X Factor?

Whether or not his behaviour has anything to do with his split from Selena Gomez is unclear but it looks as though those two are starting to patch things up now. Bieber’s reps at Def Jam have declined to comment on the rumours but young Justin will have to start playing ball if he wants his angelic image to remain intact.