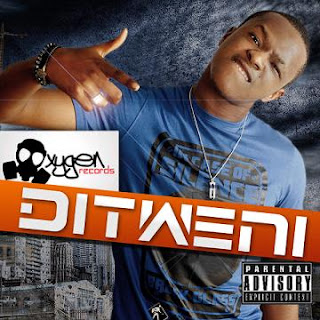 Oxygen Records which is a subsidiary of “The Oxygen Group” is a
record label that is centered on helping young and talented artist grow
both in their art as well as the music industry and also helping them get
their work known through the right media and channel.

Innovating himself to producing music at the age of 15, while
in secondary school, he begun to discover depths of love for music, giving
the real definition of pop and Afro beat sounds. The first song he wrote
was the remix to a Sound Sultan song in 2003. He didn't really have any
interest in music at the time. In 2006/2007 he got his hands on a Fruity
Loops beat making software from a friend who taught him the basics and took
the rest on himself.  He came up with the stage
name Ditweni. He Got inspired By Timbaland to Produce, constantly inspired
by Eldee , Fela , Drake, Lil Wayne and T-Pain to sing. On taking up music
as a hobby, he got love from many that inspired him to do more and be
better at the art. His “*Me Against The World*" mix tape was still at work
at that moment. The Mix tape was finished on the 28th of December 2010. .
Presently signed to Oxygen records, Ditweni is poised right now to shine as
he debuts 2 new single “I Want You” and “Konji Stabilizer” (both songs
produced by Ditweni )

He had a mix tape titled "*TWENI 1ST CENTURY*" before he got signed into
oxygen records. He has also produced songs for some upcoming artists within
and above his age circle. Ditweni has performed in high profile shows like:
Star Trek (Nigerian breweries), Nigerian Auto Shows Awards, High profile
fashion shows, Reel Radio launch, Koko Lounge comedy night. His songs get
air played regularly on notable stations like Beat 99.9FM, Rhythm 93.7FM,
Star FM and several other radio stations has been interviewed on the MTV base
big Friday show with basket mouth , has also been interviewed on Guardian
newspaper. He has a major fan base in private universities in Nigeria like
Babcock , Covenant, Bowen etc. Ditweni is not just an artist with the hype
u need to listen to his songs to understand his creativity as a producer
and singer .

I Want You
Konji Stabiliser