Mad Woman Miraculously Regains Her Senses After Being Hit By A Car. 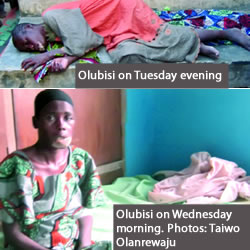 The story has been told about the miraculous cure of a 40-year-old mentally ill woman who has been simply identified as Olubisi Aina at Sanyo area of Ibadan, Oyo State on Tuesday, 11th December, 2012 after an auto accident.
According to the Tribune, which reported the story, the way and manner in which Olubisi Aina regained her sanity after about a decade or more of insanity is amazing and it could be described as a wonder. Aina had been insane for 10 years or thereabout and paraded herself, most often nakedly, on the Sanyo-Temidire-Agbamu road, her habitation for over a decade.
She usually slept on her back with her face up in drainages or on the main road close to the bridge on Damo River in the area; and come rain or shine, Olubisi was always in her habitat and is well known in the neighbourhood.
Perhaps that was her saving grace on Monday, 10th December, 2012 when a car ran over her where she was sleeping at about 9a.m.
Olubisi was quickly rushed to Oore-Ofe Hospital and Maternity Home where her bruised mouth and legs were attended to. However, after being discharged, patron of the hospital, Mr Toyin Adesina, advised that she should have a bath. She was later led by acquaintances to Damo River where she was given new sponge and soap for her bath. As she raised the sponge above her head, she said “Thank you God” in Yoruba Language. Instantly, she regained her sanity and whatever question was posed to her, she answered accurately!!!. What A Miracle.