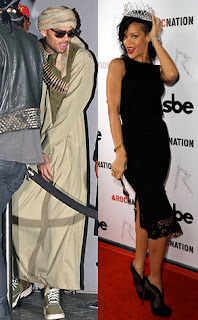 Given his history, you wouldn't think Chris Brown would want to associate himself with violence and destruction.
But Breezy clearly likes courting controversy: On Halloween, the 23-year-old R&B star and his pals dressed up with beards, turbans and fake guns—seemingly trying to look like stereotypical Arab terrorists—as they swung by Rihanna's Halloween bash at Greystone Manor in West Hollywood.

"Ain't nobody F--king wit my clique!!! #ohb," Chris tweeted, linking to an Instagram shot of himself and four pals posing threateningly for the camera.

Chris Brown defends his non-Rihanna neck tattoo.......
In the picture, Brown holds a large (presumably) fake assault rifle in the air, surrounded by his crew draped in fake ammo.
Although Brown himself provided no commentary on his questionable costume, Mama Breezy was quick to weigh in on Twitter.

"HALLOWEEN IS FOR FUN NOTHING MORE THAN JUST FUN," Joyce Hawkins wrote. "GET A LIFE PLEASE."

OK, Ma'am. We still think Chris might have been safer with a less threatening ensemble.
There's always next year....Right!? 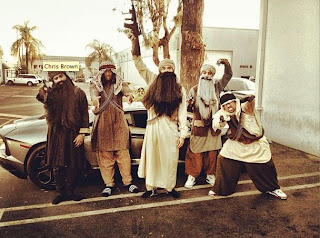