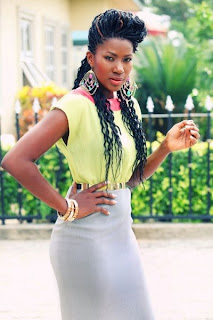 Nollywood actress, Stephanie Okereke Linus is presently on the set of her upcoming movie, ‘Dry’.

The movie revolves around the health condition, Vesico Vaginal Fistula, which remains a risk attached to the traditional practice of early marriage. The VVF as it is commonly called is caused by breakage in the vaginal wall during labour as a result of their small pelvics.

Stephanie discloses her reason for producing the movie which she says is to set free the girls at the risk of this health condition, ‘I have decided to share their stories through ‘DRY’. It journeys into the heart-wrenching details of a culture not too many films dare to explore. The issue might seem controversial, but if it will set one girl free and open the minds of the people, and also instruct different bodies and individuals to take action, then the movie would have served its purpose’, she said.

Stephanie is a graduate of the New York film Academy where she studied directing.
Posted by Unknown at 23:21