Celine Dion Bares It All In V Magazine 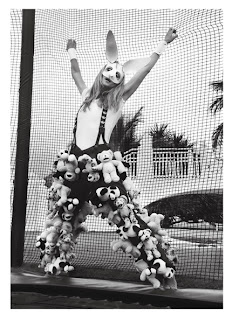 Nude photos are trending these days. And Celine Dion did not hesitate to join the bandwagon as she stripped bare for the latest issue of V Magazine, which is set to hit newsstands August 30.

The 44-year-old singer posed topless and even bottomless for photographer Sebastian Faena. In one photo, she playfully posed next to a dresser wearing only a ribbon headband, a pair of oversized hoop earrings, and a matching pair of black leather gloves and pants. Her bangs fell over her lively eyes, and the rest of her long hair flowed behind her flawless back.

In another shot, the French-Canadian mother of three covered her head with a bunny mask. She wore overalls that were strangely designed with toy bears all over on top of a light shirt. Jeremy Scott, who owns this exotic ensemble, tweeted this photo, saying, "CELINE DION IN MY @adidasoriginals BEAR PANTS STYLED BY THE LEGENDARY CARLYNE CERF 4 @vmagazine."

As the magazine promised, the photos let you see Celine Dion "as you've never seen her before."

In the issue, Celine Dion opens up about her spontaneous personality, which seemed to be the theme of the photo shoot. She confessed, "It doesn't seem this way on stage, but I'm playing a lot." The photo shoot, which took place in her extravagant home in Hobe Sound, Florida, was the first she did in six years that wasn't for promotional purposes.

She also reveals how much she treasures the gift of motherhood. Dion, who's blessed with three sons to longtime husband René Angélil, was quoted saying, "I thought I had a life before, but until I was a mom, I had no idea."
Posted by Unknown at 18:12