After accusations, claims, counters-claims and a well publicized fight between producer/singer Solomon Oyeniyi, better known as K Solo and his wife Kikelomo, the couple have reunited, saying the whole drama was a publicity stunt.

Kikelomo, who granted several tabloid interviews, accused K Solo of battery, claiming he once beat her so severely, she had a miscarriage. She also claimed to have been subjected to constant battery for varied reasons while the marriage lasted.

However, K Solo always denied all the allegations, claiming he never laid hands on his wife, and releasing his latest album ‘Mr Pedigree’ during their public spat. 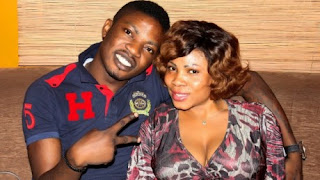 In an interview, the couple came clean.

‘Nothing really happened, we were just having fun’, Kikelomo said.

K Solo, on his part, said ‘I’m a showbiz person, If I don’t do singing, I can do acting. What you guys actually saw was acting. A lot of people were taking Panadol for another man’s headache. But on the long run it was getting bigger and I was enjoying it because you know, places I’ve not received calls from in a while’.

And as to why the couple pulled the prank, K Solo and Kikelomo said it was just a test. ‘I used it to know who my good and bad friends are. She (pointing to Kikelomo) also used it to know her true friends.’

Meanwhile, Kikelomo, who is now pregnant, used the opportunity to apologize to all those who fell for their ‘prank’, ‘Thank you to everybody and also to all those we got to, like my mother-in-law because I broke into her house with the police and all that, it was part of the thing. And also my sister-in-law… I just want to tell them I’m sorry about all that and I’m sorry for going to the press’.

However, the couple failed to explain the photos showing multiple bruises sustained by Kikelomo, which circulated on the internet.

K Solo and Kikelomo say they plan to shoot a home video about the prank titled  'LOBATAN', saying it will be a comedy, and will feature Nollywood actors Odunlade Kolade and Funke Akindele.