Why Do People Cheat? 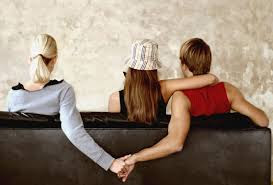 There are two primary types of cheating in a relationship - Physical and Emotional. Physical cheating is the easiest to identify and classify, while those who are cheating emotionally may not even realize it at first. Of the two, it is difficult to tell which is more damaging to a relationship as well.

So I'll just focus on physical cheating at the moment.

Physical cheating isn't just having sexual intercourse with someone other than your partner. This is doing anything physical with someone that your partner will not approve of, and that should be reserved for a partner alone. Depending on the boundaries in a particular relationship, this could mean caressing, kissing, holding, improper touching, and so on up to and including intercourse.

Why do people cheat? But I'm gonna start with men. so, Why do men cheat?

I don't mean the ones that just sleep around with no focus. I mean I have seen different guys with serious relationships and at the same time have side chicks....

It also applies to married men, in fact, that worries me a lot. Most of the men I asked why they cheat on their wives said they do so because they can handle the single chicks or so anyhow they want in bed and if they don't say yes to them, they won't force them..... That's very true, women are also part of the reasons men cheat and before you castigate me, women cheat too, I know and I'm coming to that later on. But if you wanna be sincere, you'd agree with me that men cheat more than women. *Covers head*.

But asides all that, some complained about their women at home and suggested if they can stop nagging, leave the past in the past, keep themselves up, listen to their men, respect their men and all of that, things would be fine. I'm sure if you do all these and more for men, won't stop some men from cheating, still.

Dear Reader, can you shed more light on this?
Posted by Unknown at 07:33