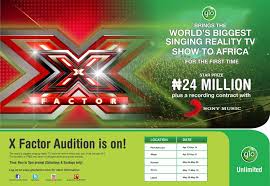 The GLO sponsored X Factor, reputed as the biggest music reality show has stormed Kumasi, Ghana today in continuation of the auditioning exercise. Youths from Kumasi region and environ are expected to take advantage of the exercise, which also holds tomorrow to contest for a position in the highly competitive show that promises winners a whopping life changing N24 million prize money and a recording contract. The team of judges would move on to Accra next weekend, May 11 and 12 for the final leg of Ghana audition.

The Ghana edition is coming on the heels of a successful outing in Abuja, the Federal Capital Territory, which saw the emergence of 17 year old twins from Owerri, Imo State capital, Clinton and Blair Roberts, among 21 other contestants advancing to the next level.

The duo called the DNA Twins were joined in the last stage by 57-year-old Ben Collins Nwachukwu from Kaduna who was the centre of attraction as the oldest person in the crowd of singing enthusiasts at the Sheraton Hotel venue of the second audition. The contestants were made up of mainly teenagers and those in their twenties.

Collins said that there was no age barrier to talent and that it had been his dream to be in a big reality show. "X Factor is not for the youth alone. It is for those who are talented and here I am. I wish to also bring my skills to lime light," he said.

Dont carry last on this one.