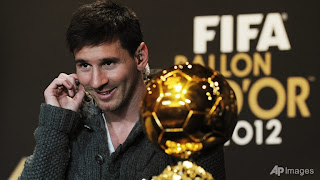 US filmmakers are to make a biopic about Argentinian football legend Lionel Messi, to be released around the time of the 2014 World Cup in Brazil.

Beverly Hills-based Epic Pictures Group said it has acquired the rights to a biography of the Barcelona star, "Messi: The Inside Story of the Boy Who Became a Legend."

The film will be a dramatisation based on the book by European sports journalist Luca Caioli, rather than a documentary. Epic will finance and produce it, and are looking for a writer and director.

Caioli drew on interviews with family, coaches and teammates for the book, which was originally titled "Messi: The Boy who could not Grow" -- a reference to growth hormone deficiency he suffered as a boy.

"Ultimately, this is a Rocky-style tale about a young boy from humble beginnings who overcomes his physical shortcomings to become one of the greatest players of all time," said the film company.

The book has been published in 32 countries in 31 languages. Luca Caioli said: "I am very excited to be working with Epic Pictures Group on this powerful story."

Epic Pictures chief executive Patrick Ewald added: "The goal is to make a powerful and positive film that will leave audiences feeling inspired to go after their dreams no matter how impossible they may seem."

The company noted, in its release about the Messi film, that it recently won acclaim for "Big Ass Spider!" by director Mike Mendez, which premiered at the South by Southwest (SXSW) festival in Texas in March....