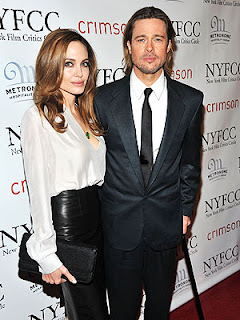 The morning after Angelina Jolie published an op-ed in The New York Times that revealed her decision to have a double mastectomy, the man in her life is showing his support.

"Having witnessed this decision firsthand, I find Angie's choice, as well as many others like her, absolutely heroic," Brad Pitt said in a statement to London's Evening Standard. "I thank our medical team for their care and focus."

"All I want is for her to have a long and healthy life, with myself and our children," Pitt continued. "This is a happy day for our family."

In her op-ed piece, Jolie described her difficult choice to have surgery because genetic tests showed her to have a high risk of developing the disease. Her mother, Marcheline Bertrand, died of ovarian cancer at 56 in 2007.

She also expressed how much she leaned on Pitt, 49, whom the 37-year-old actress described as "loving and supportive," and there for her "for every minute of the surgeries." ......