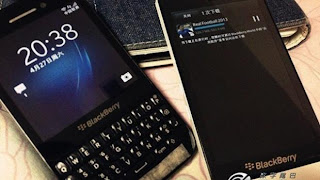 This leak comes from the Chinese gadget blog DGtle and it shows a somewhat traditional BlackBerry form factor: a screen and a full physical keyboard. The report suggests that the BlackBerry R10 will sport a 3.1-inch, 720p HD screen, a 5-megapixel camera, 2GB of RAM, 8GB of internal storage and a 1800mAh battery.

The BlackBerry R10 is also expected to be released in the late summer or early fall. BlackBerry is holding its annual conference later this month and that could be a natural time to announce the device, the full specs, its release date and pricing.

The BlackBerry R10 should run the latest BlackBerry 10 software and this is the company's modern attempt at mobile computing. It's actually quite a nice experience because it's robust, built from the ground up with touch in mind and it still places a strong emphasis on messaging in all manners.

On the down side, I still think that the app ecosystem could use some help. I also believe that there are still a lot of elements that need to be improved. BlackBerry 10 is a great 1.0 platform but it's still a 1.0 -- BlackBerry can and will evolve much of its software to deliver a better user experience. ...