Man Wins In A Battle With A Crocodile. 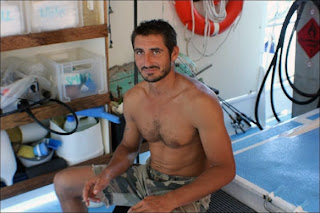 A man has diced with death after fighting off a crocodile in Northern Australia.

Frenchman Yoann Galeran, 29, had swum out to retrieve a dinghy which was floating away when a saltwater crocodile attacked at 8pm on Sunday off Nhulunbuy, in the Northern Territory.

The crocodile grabbed Yoann by the head and tried to put him into a death roll as he swum out to the dinghy in the Gove harbour but Yoann fought back, repeatedly punching the crocdile until he was able to get free.

Talking to the Northern Terrority News, he said: "It felt like a big stone or something coming on my head.

"I just thought for sure that is a croc and I started to think the only thing to do was to move my body as much as I can."


He said his head was in the crocodile's mouth for less than a second, but he had two puncture wounds from teeth on the back of his neck and another three or four puncture wounds on the sides of his head.

"I didn't think about dying. I only thought about fighting to stay alive," he said.


Yoann was again able to fight off the 2m beast before finally scrambling to safety in the dinghy. His boss, Lisa Heathcote, said Yoann was in a state of shock when he returned to their boat.

"He came back into the boat and said he had been attacked by a crocodile," she said.

But she said he could now look forward to a life of fame.

"In Arnhem Land the crocodile is part of the Yolngu people's totem. I think they are going to think he's pretty damn special because he's wrestled it and got away.

"He might get a few marriage proposals out of it."

Have you ever had to fight off an animal on your travels? .....