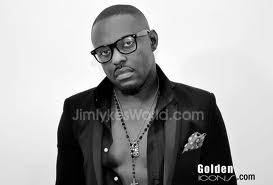 The new trend in the Nigerian entertainment industry is reality shows. First it was Omotola Jalade-Ekeinde with Omotola, The Real Me; and now, “Nollywood bad boy,” Jim Iyke, with Jim Iyke Unscripted.
Unscripted, which is jointly produced by Africa Magic and Oh Africa TV, premiered on Wednesday, April 17 on DSTV. The first episode, in a stunning climax, featured Jim’s fiancée, Keturah Hamilton, dressing him down for his wandering eye.

However, in a strange real-life twist that no one saw coming, Keturah issued a statement via her publicist in which she announced not only the dissolution of her engagement with the actor but also that her behaviour on the show was just Hollywood-level acting.

"Keturah Hamilton had acted out an edgy script of jealousy and rage towards Jim Iyke, that was delivered as well as any actress in Hollywood. Keturah was so good that even her fans were astonished to see how well she acted and was able to challenge Jim on his bad behavior. Boldly, Jim gave Keturah the opportunity to exit the reality show based on the controversial episode. Even though a pre-recorded version of “Kiss and Make-up” was on stand-by to be aired, Keturah already had made her decision,” the statement read.

Before Keturah’s announcement rumours already had it that Jim Iyke was stepping out with Ghanaian actress, Nadia Buhari. Rumours, which both actors have denied. As for Keturah, according to her publicist, she has since moved on “to bigger and better things.”

“I wish Jim well on his show and hope that he matures into the man I always wanted him to be!” Keturah said in the statement.

The reality “actress” will now star in a new reality show, Diamonds in the Rough.