Did Posh And Becks Change Their Accents To Sound Less 'Working Class'? 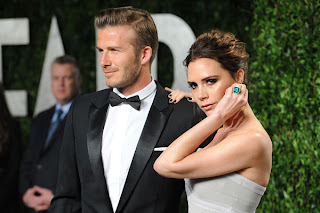 Posh by name, posh by nature? According to a study by a team of university students in the UK, David Beckham and wife Victoria have been altering their accents over the years to distance themselves from their working class roots. What gives?

Four students of linguistics at the University of Manchester have been analysing the audio of clips of the famous couple from between 1997 and 2012. Yes, really.

"In 1997, [Victoria Beckham's] speech resembled what we associate with the classic 'Essex girl'," the report says. "But by 2012, her speech no longer so strongly represented her Essex roots."

When it comes to David, the study found, "It's clear that Becks, once a broader Cockney, nowadays speaks with more of a standard English accent. In fact, he's even hypercorrecting himself because he puts 'Hs' into words when it's not really required.

"In America, they use the 'H' sound more, which explains how he acquired it — but my guess is that his dropping of those Cockney sounding vowels was linked to his ambassadorial role for the Olympics and his subsequent high social status."

The Beckhams have been living stateside since 2007, where they would've been exposed to a different, stronger, harder-sounding accent daily. While the study claims it's difficult for adults to change their accent, it's not a universal truth.

Have the Beckhams really changed their accents on purpose? Or has their American lifestyle simply tweaked their voices?.....