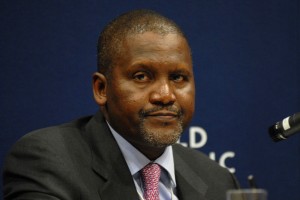 Africa’s richest man, Aliko Dangote, has announced plans to construct an $8 billion refinery in Nigeria later this year, according to a report by Nigeria’s Leadership newspaper.

Dangote made the announcement last week in Lagos during a breakfast meeting with some senior editors of various Nigerian media organizations to commemorate his 57th birthday. While Dangote did not disclose the planned location of the facility or its capacity, he said his Dangote Group, will start work on the refinery as soon as the company secures final approval from the federal government and other related agencies.

In 2011, the Nigerian government granted approvals to 19 multinational corporations to set up private refineries in the country. To date, none of the companies has set one up. At the moment, the government subsidizes the downstream sector of the petroleum industry and dictates the price of fuel products, a move which Dangote says has impeded growth in the sector.

“We are all aware that the federal government had issued 19 licenses to the private sector to establish refineries in the country, but how many of them have come on stream? There is uncertainty in the sector and only a mad businessman will put up a refinery now, but we are set to do that,” he apparently told reporters.

Aliko Dangote also sent out a passionate plea urging the government to allow the private sector to thrive by allowing market forces to determine the price of petroleum products.

In what is likely a related development, Aliko Dangote’s charity organization, the Dangote Foundation has donated $500,000 through the United Nations Children Fund (UNICEF) to support the Nigerian government’s response to managing a recent outbreak of measles that has affected many states in Nigeria.

Aliko Dangote announced the donation this past weekend when he was visited by a UNICEF delegation led by Jean Gough, the UNICEF representative in Nigeria. While thanking Dangote for the donation, Gough promised that the money will be used to procure 1.7 million doses of measles vaccine and will go a long way in supporting the measles campaign which the Nigerian government is championing through its Ministry of Health and the National Primary Health Care Development Agency (NPHCDA).

“The grant is a major contribution to government’s fight against measles, which is among the leading causes of child deaths in Nigeria, especially in areas where immunization coverage is low. As we are aware, the trend of measles follows a seasonal pattern with periods of high transmission (January to June with peaks in March) and low transmission (July to December),” Gough was reported to have said at the time.

Between January and now, over 16,000 cases of measles have been reported across Nigeria. International health organizations, governments, donors and philanthropic organizations like the Dangote Foundation have made contributions towards managing the outbreak. Last year, the Dangote Foundation gave over $100 million to causes ranging from education, healthcare, flood relief and poverty alleviation.....