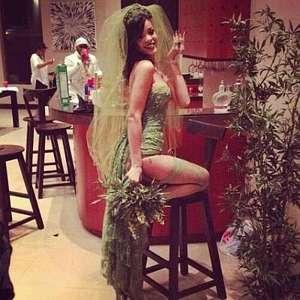 From dressing up as Mary Jane for Halloween to posting pictures of weed bouquets on Instagram, Rihanna has often flaunted her fondness for marijuana.

Luckily, though, she’s not in the middle of this newest pot-related heat.

TMZ reports that a total of 10 buses being used to transport her camp during her “Diamonds World Tour” were stopped at the border between Michigan and Canada.

Authorities allegedly caught the scent of marijuana on one of the buses and sent on a drug-sniffing dog.

The dog reportedly sniffed out a passenger with a “small amount” of weed and the passenger was charged with a civil penalty.....