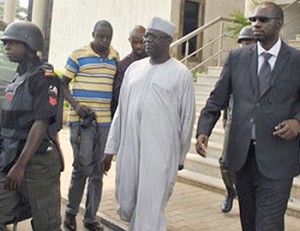 Mr Yusufu, who was on January 30, remanded in Kuje prison after he pleaded not-guilty to a 4-count criminal charge that was preferred against him by the Economic and Financial Crimes Commission (EFCC) secured bail in the sum of N10 million.

Ruling on his application for bail, trial Justice Adamu Bello also ordered the convicted former Director to produce one reliable surety in the like sum, stressing that such person must not be below the post of a Director in the Federal Civil Service.

The court also maintained that the surety must not only be resident within the Federal Capital Territory, but must show evidence of ownership of a landed property in Abuja.

The surety according to Justice Adamu should tender the title deed of the property to the Chief Registrar of the high court for authentication.

The Court also seized the international passport of Mr Yusufu, warning him not travel out of the country without permission.

“Pending the perfection of his bail conditions, the accused person should remain in Prison custody,” the judge added.

Meanwhile, before the accused was granted bail, Justice Bello, adduced reasons why he not only remanded the convict, but also why he was allowed to remain in prison detention for over two months.

The Judge insisted that his decision was aimed at assuaging the anger of Nigerians following the slap-on-the-wrist sentence that was earlier handed to the accused by an Abuja High Court at Gudu where Mr Yusufu had on January 27, confessed that he connived with seven other civil servants and stole over N23billion from the Police Pension Fund.

It will be recalled that Justice Abubakar Thalba, had relied on the statutory provision of section 309 of the Penal Code Act and sentenced him to 2 years imprisonment with an option of N750, 000 fine, a sum the accused quickly paid and drove home.

However, he was subsequently re-arrested by the EFCC following his alleged complicity in another N300 million fraud.

In the new charge, Mr Yusufu was said to have on or about February 14, 2012, knowingly failed to make full disclosure of his assets and liability in the Declaration of Assets Form he filled and submitted, and equally failed to declare that he owns a company known as AY-A Global Services Limited.

The offence according to the EFCC, is punishable under section 27 (3) of the Economic and Financial Crimes Commission (Establishment e.t.c) Act Cap E1 2004....