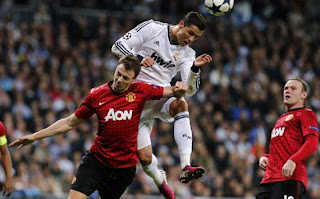 The story was a familiar one: Real Madrid conceded from a set piece, then Cristiano Ronaldo did something brilliant. Two moments that sum up a season in which Jose Mourinho's men have been below their brilliant best. And versus Manchester United, as against many others in 2012-13, it was their failure to convert chances which cost Los Blancos. Cristiano cannot do it all on his own.

Angel Di Maria dribbled, Mesut Ozil opened spaces, Ronaldo roamed. But aside from the magnificent Portuguese, nobody seemed to shoot straight for the home side on Wednesday. Madrid's 28 efforts in an exhilarating encounter should have brought more than a single goal - Cristiano's towering header after half an hour.

The strike itself was a carbon copy of Ronaldo's stunning winner in the 2011 Copa del Rey final against Barcelona at Mestalla. Then, as on Wednesday, Di Maria launched a brilliant inswinging cross from the left touchline to the far post, where the Portuguese rose majestically to hammer home a header which not even Man of the Match David De Gea could stop. It was a magical moment, yet one which surprised no-one - least of all Sir Alex Ferguson. "What a header. Unbelievable. You can't stop that," the 71-year-old said after the game. "The spring, the way he holds himself in the air, the power in the header. I said to Patrice Evra at half-time, 'you didn't challenge for that'. And when I saw the video I thought, what was I talking about?"

"When he gets the ball, you are praying more than anything," Ferguson added about Ronaldo. But after a first half in which the Portuguese threatened to run rampant, United's defenders got closer to their former team-mate after the interval. Others, however, were afforded more time and space in and around the penalty area by the visitors. But unfortunately for Madrid, none were able to make it count.

Sami Khedira wasted a wonderful opportunity early on, while Di Maria played his best game in some time but was erratic with his shooting, Ozil dallied on a number of occasions and Karim Benzema was dispossessed far too easily. His replacement, Gonzalo Higuain, was unable to take up promising positions, either, so it was left - as is so often the case - to Ronaldo.

Madrid have come to rely upon their talisman in games like this one, and against Barcelona in the Clasico - but the Portuguese cannot do it all alone. He needs a new partner.

Ozil and Luka Modric score very few, while Jose Callejon has looked lacklustre of late, Kaka is out of favour and the strikers - so impressive in 2011-12 - are simply not scoring sufficiently this term.

Former Madrid player, coach and sporting director Jorge Valdano criticised Mourinho last week for his man-management of both Higuain and Benzema, claiming the two strikers are demoralised because neither feels like the first-choice frontman in the team's 4-2-3-1 formation. The truth, however, is that neither deserves to be - at least on current form.

In the very big games, Madrid need a man who will rise to the occasion like Ronaldo is now doing on a regular basis. Like Didier Drogba did for Chelsea, Samuel Eto'o for Barcelona, Thierry Henry at Arsenal or, currently, Radamel Falcao at Atletico.

Madrid have a 'non-aggression pact' with their city rivals, but they would love to sign Falcao or a forward of the Colombian's calibre.

Mourinho has been keen to bring in a top-class striker since the very beginning at Madrid, but Benzema and Higuain are already among the finest forwards in world football. If a new man is brought in, he must be one of the very best - better than what they have already.

So while negotiating a contract extension for 183-goal Ronaldo (in terms of ratio, the greatest goalscorer in the club's history) must be a priority for Real Madrid this summer, a new partner for the Portuguese should sit second on their to-do list in the next window. Because without one, the promised land of La Decima may remain nothing but a distant dream for many more years to come.