Rihanna 'Goes Wild To Chris Brown Track In Club' After Confirming The Pair Are Officially Dating. 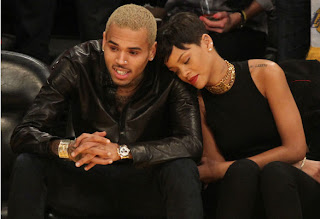 Sources have said that the 'S & M' star seemed in good spirits, dancing and drinking with friends at Kiss & Fly night club in the Meatpacking district of the Big Apple.

“Rihanna jumped on the couch to dance when DJ Camilo played ‘Don’t Wake Me Up’ by Chris Brown,”

“Rihanna seemed to be in good spirits. She and her group came around 12:30 a.m. and didn’t leave till 3:15 a.m. They were sipping on Jack and Cokes, dancing and laughing,” the source continued.

RiRi confirmed that she's back with Chris Brown to Rolling Stone magazine.

Speaking of their relationship, she told the mag, "Even if it's a mistake, it's my mistake."

Regarding the effect it may have on public opinion of her she said, "I decided it was more important for me to be happy." The singer did assure fans that, "he doesn't have the luxury of f**king up again," if he shows a hint of previous behaviour she'll walk.

Rihanna also adds, “He’s not the monster everybody thinks. He’s a good person, he has a fantastic heart. He’s giving and loving and fun to be around. That’s what I love about him. He always makes me laugh. All I want to do is laugh, and really that’s what I do with him.”