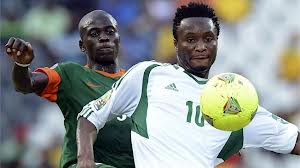 
Looking relaxed and in company of roommate Victor Moses, Mikel said he was hurt when it was reported that he had picked up two yellow cards.

“I am the one that is always at the receiving end of hard tackles and I knew that I had only one yellow card but the media was going about it that I have had two. I was a little confused but now I’m happy and relieved and ready for the match," Mikel said.

He continued: “I know that Africa wants the best from both countries in the quarter final and personally I’m looking forward to the midfield battle against Ivorian Yahya Toure. That will be one good spectacle that Africans will like to see and I know that Toure is also relishing it.”

Team Coach, Stephen Keshi said he was a bit alarmed by reports that Nigerians have already written off the Super Eagles against the Ivorians.

“It’s at this point that we need the total support of all Nigerians. Names don’t play football and our players are ready to give their all in the game against the Ivorians."