Rihanna Attacked By Fan At London Nightclub Over Chris Brown. 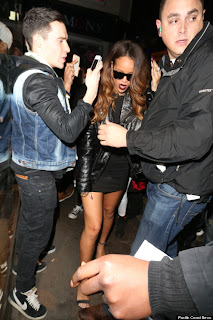 It's tough being Rihanna: The 24-year-old singer was attacked outside of the Box nightclub in London Monday morning, when a heckler threw an energy drink bottle at the star.

British rag The Daily Mail reports that the assailant was a "crazed fan" who "screamed at Rihanna about Chris Brown" before hurling a bottle of Lucozade, a type of energy and sports drink, at the star. Rihanna reportedly suffered a scraped right knee from the incident (which can be seen in the photo below), while her bodyguard was also injured and taken to the hospital.

The attack comes just one week after the "Diamonds" singer appeared at the Grammys with on and off-again boyfriend Chris Brown, 23, happily sitting next to him and making clear their status as a reconciled couple. It was the couple's first official appearance together at a major event in nearly four years, when Brown assaulted Rihanna on the eve of the Grammys in 2009.

In a recent interview with Rolling Stone magazine, Rihanna admitted that she understood her decision to take Brown back into her life would upset others. "Even if it's a mistake, it's my mistake," she said. "After being tormented for so many years, being angry and dark, I'd rather just live my truth and take the backlash. I can handle it."