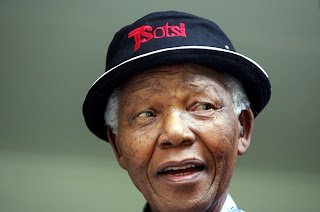 The latest family to jump on the reality show bandwagon is the Mandelas.

Former South African President Nelson Mandela's granddaughters, Zaziwe Dlamini-Manaway and Swati Dlamini, are coming out with a new reality show that will feature the entire Mandela clan, except their 94-year-old grandfather.

Mandela is recuperating from a surgery to remove gallstones and though the sisters said he was healthy, he was not expected to be a part of the first season comprising 13 episodes. However, his ex-wife, Winnie Madikizela-Mandela, will be a regular on the show that will be featured on COZI TV.

"Being Mandela" will follow the sisters' journey as they try to hold up their legacy in Johannesburg, while at the same time struggling to cope with day-to-day chores. Through the reality show, the fashionable sisters want the U.S. audience to see a modern and liberated South Africa.

When questioned if a reality show such as this would tarnish the Mandela name, Dlamini told the Associated Press: "We asked this question a lot. Is this not going to tarnish the name and is this not going to be bad for the name? But our grandparents have always said to us, this is our name too, and we can do what we think is best fitting with the name, as long as we treat it with respect and integrity."

The sisters are confident that Mandela would love their show, as he is said to be a huge fan of reality television. "You'll be interested to know that he loves 'Toddlers and Tiaras,'" said Dlamini.
"Because of the kids! He just loves children," her sister chipped in.