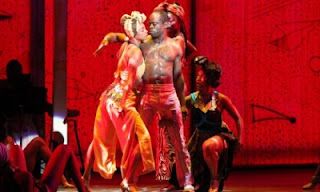 Since the hit musical and biography of Fela Anikulapo Kuti hit Broadway several years ago, it has mesmerized audiences from New York to London to Nigeria with its vibrant music, energy and passion. Now, the Washington area is getting another chance to see the award-winning musical.

FELA! tells the story of a man who was a musician, shaman, rabble-rouser and creative genius. Fela Kuti created Afro Beat, a dizzying, hypnotic but incendiary combination of funk, jazz and sensual African rhythms and harmonies which he laced with acerbic lyrics to chastise and criticize Nigeria's corrupt, impervious and despotic regimes.

The play celebrates an artist and human rights activist, who despite his womanizing and love of marijuana, embodied the defiance, frustration and aspirations of his fellow Nigerians. The play, which won three Tony awards, opens with Fela mourning the untimely death of his 77-year-old mother who was thrown out of a window by Nigerian soldiers. She was fatally injured when her son's compound, the Kalakuta Republic, was raided by about 1,000 soldiers.

Cast members Melanie Marshall and Maija Garcia said they are grateful to be associated with the critically acclaimed theatrical production, adding that it has affected them in profound ways.

"It's great to see who this transforms. The artists and the audience, no one is the same," said Garcia, the production's assistant choreographer and tour director. "They're met with heat and style and energy. It's not something they see, it's something they feel.The work speaks for itself and Fela comes through the channels we use."

"We have the original cast and new talent. It's sort of like a chemistry experiment that will explode beautifully to evolve new characters. It's always very exciting to bring up the energy of 1977 in Los Angeles or Lagos."

Marshall, who plays Fela's mother Funmilayo Ransome Kuti, described her experience as "an amazing process from beginning to end." She said she is humbled to have the opportunity to play an extraordinary woman who walked the path less traveled.

"This is a strong, feminist role. She was very regal, she's very political minded and no-nonsense," said Marshall, who admits that she'd planned a singing career until she was invited to audition for 'Carmen Jones.' "She was the first woman to drive a car in Nigeria and the first to go to China. She was on first- name terms with so many leaders and notable people. I wish I could have met her and Fela. I'd never heard about him before this job. But I learn something about him every moment, every minute, every second."

"All of them are just so poignant. Some of them are funny, some of them you just sit and think about the lyrics," she said. "For a man who'd been shot, beaten and tortured more than 200 times, if there's any word that people should come away with and what the show invokes, is courage. He was still standing, still singing, still standing for his people."

Marshall also said she's grateful to director Bill T. Jones for pushing her to stretch beyond her comfort zone.

"He gave me another five notes on the top of my range. He is very subtle in bringing something out of you that you don't know you have," said Marshall, who studied classical singing at the Royal College of Music in London. "It hasn't been hard because it's been so much fun."

"Bill T. Jones took what I brought to the table, put the jazz, gospel and church I had and made me into Olufunmilayo."

"I can honestly say this is my best role to date," said Marshall, a 51-year-old Briton of Barbadian parentage.

Marshall and Garcia said the fact that cast members were chosen from American and British casts strengthened and added an entirely different dimension to the final product. Each spoke of the hugely influential role Jones played in creating and developing the play and his effect on them.

"There's always that screw that needs tightening, that little knot, but it all comes together," Marshall said. "He scared us. He doesn't stand on ceremony, doesn't stand for any nonsense. He picked you and you're chosen for a reason and you better not let him down because you represent him, the Kuti family, the show and you'd better not be disrespectful of all of that. That is not an option."

Garcia, who spoke proudly of her Cuban roots and who described herself as the creative impulse for the play, said she's awed by her mentor.

"He's a force to be reckoned with," she said with a laugh. "He really is an artistic genius. I respect and admire him. He has the insight and ability to draw things out of people. He is a real phenomenon to witness. This play is a monument to his will and creative genius."

Garcia, a member of the production's original creative team, said she's enjoyed taking creative risks and has grown as an artist.

"This is a medium of social activism, my place in the global village. Theater is the proverbial fireplace where people gather and where the spirit stays alive. Fela! asks what's your life's purpose and what do you plan to do. It's very exhilarating," she said.

The play's run ends on Feb 10. Performances are at the Shakespeare Theatre in Northwest.....