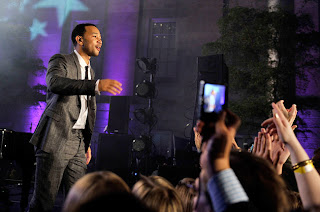 "Nope. I like it from this angle," he said in an interview Saturday night.

The event was just one of will.i.am's inaugural appearances: He's attending the Candle Light Inaugural Ball and Green Inaugural Ball on Sunday and will be a guest at Obama's public swearing in ceremony Monday and at the Inaugural Ball later that day.

He said it "feels good" to lend his hand to the Obama campaign and that he wants to see young voters do more.

"This is important for the youth to realize how powerful they are and to stay active and stay informed, and go out when it's time to vote. And not just for a presidential candidate, but for local government, too," he said.

Common kicked off the live performances with songs like "The People" and "Testify." He even danced and kissed a fan onstage - and on the lips - while Beyonce's "Party" blasted in the background.

"Just be whoever you are no matter what they say," Common said to the crowd.

The rapper also hit the stage with John Legend, who played piano as Common performed "The Light." Legend slowed the night's upbeat mood, crooning on songs like "Green Light," ''Tonight (Best You Ever Had)" and "Ordinary People."