Schwarzenegger Is Far From His 'Last Stand'. 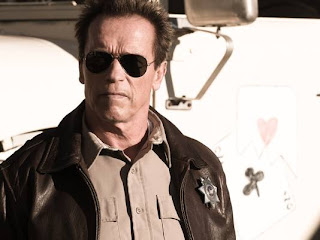 Arnold Schwarzenegger's first order of business on the New Mexico set of The Last Stand in the fall of 2011 was to sit down with the stunt team for a frank talk.

He wanted to make sure that in his return to action films (Stand opens Friday nationwide) that every stunt he attempted counted — he was age 64, and there wasn't going to be an endless supply of physical feats.

"I said, 'Look guys, here's the deal,' " Schwarzenegger recalls. "'When Carl Lewis did the long jump that won the gold medal, I was there. There was no cameraman that went up to him afterward asking to jump again because he didn't get the (expletive) shot. That's going to be the case here. There's no room for that."

Yes, the former bodybuilder who launched an acting career more than 40 years ago, and turned the Terminator role into a seemingly indestructible icon in the 1980s and 1990s, is making concessions to aging. Especially after an eight-year detour from Hollywood that led him to the governor's mansion of California for two terms.

But like his Last Stand character — a small-town sheriff who leads a comical group of deputies to fight off a drug cartel — Schwarzenegger has come out swinging as he attempts his first leading role since leaving office in 2011. Yes, swinging, even if it's tougher on the joints these days.

"This is not the Terminator," Schwarzenegger, now 65, admits. "This is a very different character, you know. You get older and wiser."

This also means the one-time box-office champion has moved to another phase in his life. After leaving political office and then enduring a headline-making split from his wife of 25 years, Maria Shriver, in the wake of a paternity scandal, Schwarzenegger is looking to put his movie career back into high gear.

"This is a new chapter, re-winning audiences' affection and loyalty, which he has done many times in his career," says producer Lorenzo di Bonaventura. "This is the beginning. And Arnold wants to win. He has this robustness and energy that's the same as when I met him in 1980. That has not dissipated. If anything, it's accentuated, because you'd imagine with someone getting older it would be less. But it's definitely not."

This robustness is on display as Schwarzenegger strides into the members-only Grand Havana Room, his frequent Beverly Hills hangout spot, wearing a custom-made suit, Prada shoes and a large ring with the California governor's seal ring on his wedding ring finger. He's eager to sit down with di Bonaventura to talk about the film, just as long as he has a Davidoff cigar brought to him from his private humidor.

"I smoke much less than I used to," Schwarzenegger says. "But one little cigar at the end of the day isn't bad."

He boasts about the cigar tent he erected in the courtyard next to the governor's office: "Legislators liked to pass anti-smoking laws," he says, flicking open his lighter and bringing the flame to his Davidoff. "And then they would come to the smoking tent."

At the end of his final term as governor, Schwarzenegger told his longtime collaborator di Bonaventura, with whom he had worked at Warner Bros., that he would return to the business. Di Bonaventura immediately sent over a script. Schwarzenegger, who says he was too busy working "my (butt) off" in his final days, insisted he didn't even read the script.

"I felt like an ant, there was so much happening with the (state's) economic decline, people losing jobs, that I wanted to pay full attention and sort of sprint to the finish line," says Schwarzenegger. "I didn't want people to say it's a lame-duck session, bla bla bla...

But after leaving office, Schwarzenegger signed onto two parts — a small role in last summer's The Expendables 2 and The Last Stand, where Korean director Kim Jee-woon makes his English-language debut. Working with Sylvester Stallone in Expendables for four days proved to be "a great warm-up, the perfect transition" for the much larger follow-up role.

As The Last Stand cast and crew debated how they should refer to the former governor and action icon, Schwarzenegger jetted in ready to rumble.

"Everyone got the cue. Don't (mess) around," says Schwarzenegger. "If we're shooting a scene late, don't complain, there's a reason for that. When the call time is for 7 o'clock, I was there at 7 o'clock. That's what kind of movie this was. The leading man creates the atmosphere on the set."

And while Schwarzenegger had laughs with co-stars Johnny Knoxville and Jaimie Alexander between scenes, they knew when showtime started. "He worked his butt off," says Alexander.

Luis Guzmán, another one of the actors playing deputies, said he was impressed that Schwarzenegger was willing to show the vulnerability of age in the movie.

For Schwarzenegger, the screen vulnerability comes naturally with age — even if he remains active and works out for 80 minutes every day. "Automatically it gets dialed into your brain whether you want to or not. You look at things totally differently. You look down the black diamond hill more cautiously when skiing. In the old days, you wouldn't think of it. Now I look at it and think 'Where's the best way to get down?' ''

Despite that, Schwarzenegger was also eager to do as many stunts as needed, strapping on the safety harness for one key fighting sequence that leads to a building fall. In another scene, he is thrown through a door and announces, "I'm old."

"They have it fixed up so that you break through the door easy," says Schwarzenegger. "But you still have to land on your arms and chest and all that stuff."

They shot some of those scenes three times, which was fine in his book.

"They were very much aware, 'Let's use Arnold, but let's not abuse Arnold,' " says Schwarzenegger.

Yet the hardest days were the relatively mundane stunts where, for example, Schwarzenegger had to jump over the hood of a car. "You have to do it over and over again. And your pants are too tight and you cannot lift your leg up high enough to get it over the hood."

Ironically, his worst injury was a fluke that came while he was walking off the set as the camera crew was rehearsing a shot.

"I put my jacket on to walk away and all of a sudden the camera comes in and smacks into my forehead and the blood is gushing down," says Schwarzenegger. "It wasn't even a scene."

Maintaining his tough-guy image, he was whisked away to the local emergency room, took four stitches and zipped back for more shooting.

"The director said the wound could be removed digitally. So we continued."

"A lot of people take the day off and there's an insurance claim and everything," says di Bonaventura. "That's just a fact of what is. But not Arnold." 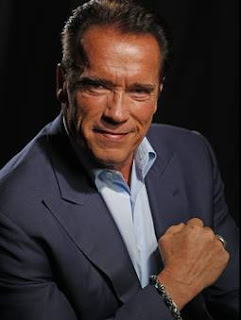 Wade Allen, one of the film's stunt coordinators, recalls Schwarzenegger skillfully driving his Camaro in an intricate cornfield car chase with him repeatedly slamming into his screen foe's car — "It was fantastic, and with Arnold driving!''

The star also dutifully took on the prolonged hand-to-hand combat scene in the finale.

"There was a lot of physicality in that last sequence. It's (Schwarzenegger) throwing punches and dropping the other character on the side of a bridge. There was not a lot of Hollywood tricks," says Allen. "At the end of the last day, he was moving a little slower. He had that look of an action star that has given his all and was a little tired. But he did a great job."

It's a work ethic and energy that could bust Arnold right back to the top of the Hollywood game. He already has shot another two action movies since leaving office: The Tomb, alongside Sylvester Stallone (due Sept. 27); and Ten, alongside Sam Worthington as a member of an elite DEA task force (2014).

While shooting The Tomb, the 66-year-old Stallone injured his calf in a scene while carrying a heavy pack down a ladder. Schwarzenegger decided to warm up to prevent the same injury.

"And then I pulled a calf (muscle) warming up, I didn't even do anything," says Schwarzenegger. "So I went to Stallone's trailer and it turns out we pulled it in the same place. The same injury, the same calf."

Stallone got on the phone and asked for an additional cortisone shot. "The doctor gave us the shots and we were fine to work again," says Schwarzenegger.

He claims that was another fluke that had nothing to do with age ("It's the unexpected moments you have to watch out for no matter how old or young you are") and he believes he can keep doing action films as long as he wants. Just like Clint Eastwood.

"It's the way the movies are done," says Schwarzenegger.

"The reason we put faith in guys like Arnold and Clint is that we want them to decide what's right and wrong," says di Bonaventura. "They don't have to be invincible. It's not an age thing. It's a hero thing."

One thing for sure, Schwarzenegger is certainly not going to be like his small-town Sheriff Owens in Stand, content to sit back and let the world go by. He even refuses to sit in a plush leather chair for a photograph, preferring to sit in ready position on the chair's arm.

As far as the movie business goes, there's simply no talk of retirement.