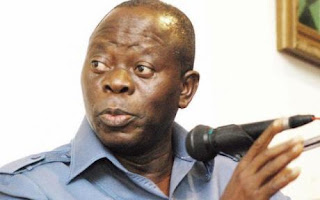 Edo State governor, Comrade Adams Oshiomhole has hinged the spate of kidnappings and other high profile crimes to greed which he said had led to high moral decadence in the society, even as he commended security agents for tackling crimes in the state.

He also commended the State Security Service (SSS) and the Nigerian Army for  investigating and arresting criminal elements in the state.

The governor made the commendation yesterday during a parade by the Edo State Command of the SSS, where seven suspected kidnappers were paraded for their various levels of involvement in  kidnapping and other criminal activities.

Two of the suspected kidnappers, Peter Omoregbe ,31 and Oshaifi Karimu, 38, who allegedly kidnapped the Auditor General of the Federal Capital Territory, Abuja, Fred Omoaka, at Igbanke in Edo State were also paraded.

State Director of the SSS, Tukur Bello Bakori, who paraded them before governor Adams Oshiomhole, confirmed that the suspects collected the sum of N10 million ransom from their victim, and that N2.7 million was recovered from them after their arrest.

The suspects however confessed their various involvements in the crime, adding that they were tracked down by security operatives when one of the suspected kidnappers was caught with a Blackberry handset belonging to one of their victims.