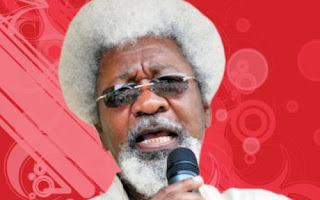 Noble Laureate, Professor Wole Soyinka has said that corruption was being used as a unifying factor in Nigeria as it had eaten deep in all sections of the country with no restriction.

He said that corruption was an heinous crime against the nation that must be tackled by every means possible saying that it was not restricted to any region, religion , tribe or ethnic group.

The literary icon maintained that since it was not restricted to any section of the country it could be seen as a unifying factor even as it has gradually destroyed the value and sense of nationhood.

Soyinka therefore urged writers to rise up against corruption.

He said writers should find solution to the problem of corruption and other vices through proper research works instead of bemoaning the situation.

Soyinka recalled that when the advance free fraud started in Nigeria it was called 419 and some writers gave it names as it was seen as a means of repatriation instead of rising against the scourge.

According to him vices like kidnapping should not be blamed on unemployment but a product of criminally minded individuals who are out to undermine the freedom of others for their own greed.

He  said, “let us not trivialise issues, it is criminal for anyone to throw bomb at market places and places of worship under the guise of marginalisation” adding that, “there is a difference between one taking arm against the authority and declaring war against the nation”.