Tuface Disclosed The Reason He Had A Secret Wedding. 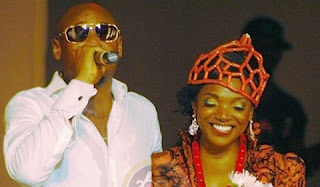 For the first time, Nigerian music star Tuface Idibia has opened up about his marriage to Annie Macaulay last year.

The wedding put to rest the lingering question of whom and when the musician was going to marry after speculations that he has been linked to several females.

The relationship between the African Queen singer, born Innocent Ujah Idibia, and Annie, who appeared in the song’s video, was apparently drama-free.

The two were believed to have dated for 13 years and have a daughter, Isabella Idibia, together.

Tuface disclosed in an interview with the Punch Nigeria that he settled on Annie because she “is my first and true love. I had known her before I met the other women in my life. As a Christian, I had to marry one woman and it just had to be Annie.”

According to him, “We had a secret wedding after we had reached an agreement and amicable understanding about the mothers of my children. It was a tough decision to make, one of the toughest in my life.”

Asked why he married secretly, he explained “I secretly married her because I have so much respect for my other babies’ mothers; I cannot afford to hurt their feelings with a sudden society wedding with Annie, not now. I chose her above the others because she has been through it all with me.”...........