Facebook continues to prove its detractors wrong, clocking a monthly user base of over a billion. That's double the 500 million it hit in July 2010. August 2008 marked another big juncture, 100 million users.

The latest milestone also amounts to nearly half of the world's roughly 2.5 billion Internet users, as measured by the International Telecommunications Union.

CEO Mark Zuckerberg marked the milestone on his Facebook page, as he has in the past when the site's users hit nice round numbers.

"If you're reading this: thank you for giving me and my little team the honor of serving you," he wrote. "Helping a billion people connect is amazing, humbling and by far the thing I am most proud of in my life."

Most of the Facebook users - 81 per cent - live outside of the US and Canada. Many of them log in on mobile devices rather than personal computers, and the company now has 600 million mobile users.

And millions of them are not actual people. Facebook acknowledged in August that 8.7 per cent of its then-955 million users may be duplicate or false accounts. At that rate, as many as 87 million accounts are fake.

As expected, the longer users are on Facebook, the more "friends" they have on the site. A user who signed up two years ago has an average of 305 friends. Someone who signed up in December 2005, when Facebook had nearly 6 million users, now has nearly 600 friends, on average.

The California-based company's stock never recovered from a botched initial public offering (IPO) in May, at one point seeing its value slashed in half by shareholders who don't think it's increasing revenue fast enough, especially from its fast-growing mobile user base.

Last month Zuckerberg gave his first interview since Facebook's shaky IPO and since that time he's been working hard to boost confidence among investors, employees and the public.

The 28-year-old executive also continued to reassure that he is the right person to lead Facebook, as some on Wall Street have questioned whether he has the ability to lead a large public company. 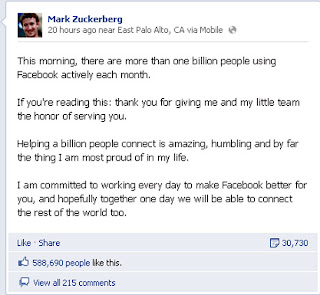