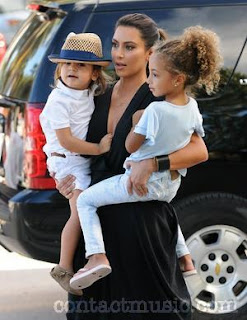 Reality star Kim Kardashian may not be officially divorced from her ex-husband Kris Humphry yet, but that doesn't mean to say that she isn't already thinking about tying the knot with current beau Kanye West.

Speaking to Tatler Magazine, Kim revealed that she had always wanted a big blowout of a wedding like the one she had with husband of 72 days Humphry, but next time round she wants something a little more low-key. She told the magazine: "It had always been my dream to have a big wedding, and when people said that I'd made it over the top for ['Keeping Up with The Kardashians'], that was just me - I am over the top. But the next time, I want to do it on an island with just my friends and family and that's it."

Kim and Kanye have been seeing each other for around seven months now and in the interview with Tatler she admits that unlike past relationships, she feels as though this is the one as she is truly in tune with her man. The pair go back some years and Kim commended the friendship the two share as being integral to the strength of their relationship, saying, "It's so nice to have a best friend in this game who understands everything you're going through."...................................