Third 'The Hobbit' Film Gets Title And Release Date.


The third instalment of Peter Jackson's forthcoming The Hobbit trilogy has been given a title and release date, according to reports.

In July, Jackson revealed that he would be making three films based on the adventures of Bilbo Baggins, rather than the previously announced two, as he had so much material he couldn't help but "want to tell more of the tale".

Now, according to Empire, the final part of the trilogy will be titled The Hobbit: There And Back Again, which was originally the title of the second film – however, the middle instalment of the saga has now been renamed The Hobbit: The Desolation Of Smaug. 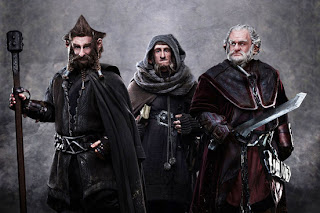 Meanwhile, Warner Brothers have also revealed that the third film will be released on July 18, 2014, just eight months after the second movie in the series hits the big screen. Speaking about the short time gap between films, President of Domestic Distribution Dan Fellman said: "We wanted to have a shorter gap between the second and third films. Opening in July affords us not only the perfect summer tent pole, but fans will have less time to wait for the finale of this epic adventure."

The first film in the series, The Hobbit: An Unexpected Journey, opens on December 14 of this year. Martin Freeman will star as Bilbo Baggins, while the film will also boast an ensemble cast including Sir Ian McKellen, Elijah Wood, Andy Serkis, Orlando Bloom, Evangeline Lilly, Bret McKenzie and Cate Blanchett. Watch the trailer above

The Hobbit: There And Back Again' to hit screens in July 2014.