Prince Harry’s new model girlfriend Cressida Bonas is reportedly “humiliated” by the recently revealed pictures of him enjoying the company of a young blonde in his Las Vegas hotel room. According to sources, the couple has not split up but the 23-year-old Leeds University graduate, who saw the pictures of the naked royal on the internet, has hinted that she wants some time out, the Daily Mail reported.

Their friends have said that their romance has hit a rough patch following the Las Vegas trip, but the couple is hoping to get back together before too long. 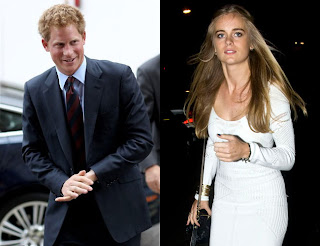 Bonas, who is the daughter of 60’s cover girl and banking heiress Lady Mary-Gaye Curzon, had enjoyed a holiday with Harry on Necker, the island owned by Sir Richard Branson, shortly before his jaunt to Sin City. Together with a group of friends, the couple was on the island to celebrate the 27th birthday of Branson’s son, Sam.

Bonas is reportedly “less than impressed” by the pictures that have emerged from the boys-only break in Las Vegas.

During the Necker holiday, the Prince and Bonas were acting very much as a couple, friends have said. “The relationship was pretty low key to begin with, but some of Cressida’s friends say it won’t get off the ground now,” a friend of Bonas said. “Cressida is pretty peeved,” the friend added.

“We would like to offer you the opportunity to truly become the coolest Prince of all time, by starring in a fun, sexy, big-budget adult film called The Trouble with Harry,” the New York Daily News quoted Hirsch as writing in the letter.

“Of course, ‘little Harry’ will make an appearance too, but we assure you the sex will be well scripted, and the Crown Jewels will not be ‘minimised’ in any way,” he wrote.

Vivid Entertainment is offering the money, if Harry is willing to display, as they put it, “the Crown Jewels.”

At the age of 17, he was found smoking cannabis and partaking in under-age drinking with his friends. The allegations were made by News of the World newspaper, which also reported his father Prince Charles had taken Harry to a drug rehabilitation clinic to alert him to the dangers of drug abuse.

In 2005, he was photographed at Highgrove House at a colonial and native themed costume party wearing a Nazi German Afrika Korps uniform with a swastika armband. He later issued a public statement apologising for his behaviour.

In January 2009, the British tabloid News of the World revealed a video made by Harry three years ago, in which he referred to a Pakistani fellow officer cadet as “our little Paki friend” and later called a soldier wearing a cloth on his head as a “raghead.” Clarence House immediately issued an apology from Harry, who stated that no malice was intended in his remarks.

In 2010, Prince Harry was accused of animal cruelty after his horse suffered a bloody injury during a polo match. He was photographed riding a pony that appeared to have been stabbed in the flank by his spurs.