Nigerians Criticize Rick Ross Over "Hold Me Back" Video. 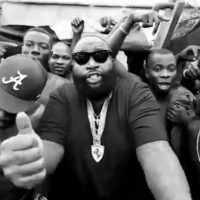 American rapper Rick Ross has been criticized  on Facebook and Twitter for portraying Nigeria in a bad light.

The promo video shows the rapper, dressed in gold chains and a flashy watch, visiting the slums in Lagos and rapping as he's mobbed by crowds. Women are filmed washing clothes and goats are caught wandering around the slums while the video also features news footage.
The video titled  “Hold Me Back”  shows children reaching  out for dollar bills.

On twitter, filmtriQue fumed: "Rick Ross is just trying to paint a negative picture about Nigeria. We’re not monkeys over here."

RobertAlai said: "Damn!!! I also don't like this Rick Ross video shot in Nigeria, it is  just too negative."

One wrote, "Why do Africans always complain when foreigners depict our countries? Rick Ross shoots a video in Nigeria and everyone's up in arms."

The video, which was originally shot in New Orleans the first time, shows the rapper dressed in his big chains and expensive watch visiting the Lagos slums mobbed by crowds while he raps.

'Hold Me Back' features news footage of events happening in the country alongside women filmed washing clothes and goats and wandering the streets of the Nigerian slums.

Taken from the stars July released God Forgives, I Don't, 'Hold Me Back' is the most recent video released from the rapper.

The video starts with commentary about the Biafra war and then launches into a series of clips shot at different poor areas of Lagos State with scores of Nigerians chanting along the chorus with him.

What Do You Say?
Was He Wrong?