Kristen Stewart, Robert Pattinson Are Back Together. 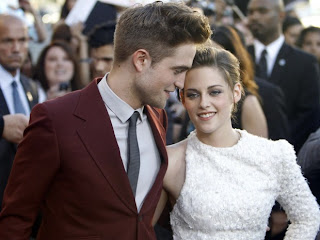 Kristen Stewart and Robert Pattinson have reconciled, apparently burying the hatchet after Stewart was caught canoodling with married British director Rupert Sanders. The pair met up in Los Angeles over the weekend, which may have just been so Pattinson could get his hat back but why rain on the parade? And besides, an anonymous source who is apparently friends with the “hunky actor” (that’s Pattinson) “thinks they’ll be a couple again,” which pretty much seals the deal.

Since Stewart was caught cheating with Sanders, her Snow White and the Huntsman director, the couple had not been seen in public together.

Pattinson made several talk show appearances to promote his film, Cosmopolis, on which he avoided making any mention of Stewart’s affair, while Stewart made a gushing public apology (not to the public, but to Pattinson), and at the Toronto International Film Festival told reporters that she and Pattinson would be  “fine.”

And they are, probably.......So is this good news or bad news for Twi-hards?