My Husband Is Not Gay, He Doesn’t Belong To Illuminati - Lady Di defends Charly Boy 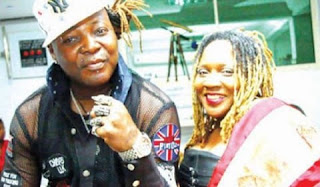 Lady Di, who has been Charly Boy’s wife, for over 35 years, has defended her husband, saying all the stories about his sexuality and his involvement in the Illuminati cult, are all made up.

“This is not the first time it’s happening. The only difference may be due to the context through which the rumour went viral, but realistically, there is nothing new about the rumour, we have heard it over and over again…I think people try to merge his personal life and artistic life. Obviously, they cannot be same,” she said.

She emphasized that her husband has built his personal brand to stand the test of time.

“Charly Boy had always hated the fact that someone should live the life of others…he only wanted to be himself…he wanted in a very aggressive way to build a brand that will become an all time favourite to young people…but before then, we knew that controversy would sell quicker than anything else,” she said.

Hmm mm, then what's up with those nude pictures of his? Were they made up too? Or what do you think my people????