Arsenal Ready To Give Green Light For £15m 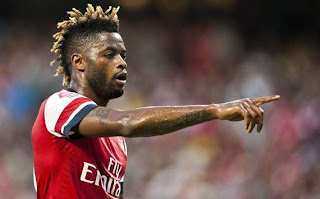 The Spanish giants have indicated they will meet the Londoners’ valuation of the midfielder in a development in negotiations between the two clubs.

Arsenal are ready to give the 24-year-old the green light to become the fourth player in five years to make the move from Emirates Stadium to Nou Camp.

Barcelona were encouraged when their exploratory enquiries for Song were met with the response that indicated the player would be available for the right price.

The Catalan club had initially refused to meet Arsenal’s £15m valuation of the player, but sources have told Goal.com that a deal at that price has now been agreed.

Song, who joined Arsenal, initially on loan, in 2005, is poised to be granted permission to discuss personal terms with Barcelona.

He explained in the wake of the club’s pre-season victory over Cologne on Sunday that he was flattered by Barcelona’s interest.

"I am not going to lie if I said there is no interest but I am at Arsenal and I am happy at Arsenal," he told Sky Sports. "Barcelona are the best team in the world, and speculation will always continue until the window closes."
Arsene Wenger will come under pressure from Arsenal fans to secure an immediate replacement for Song, who is the closest player in the Frenchman’s squad to a proven defensive midfielder.

Arsenal announced on Wednesday night that they had agreed to sell Robin van Persie to Manchester United for a fee believed to be worth £24m.

With £39m swelling the club’s coffers, Wenger will be expected to find a battle-hardened replacement for the Cameroon international, especially given that the squad is packed with attacking midfielders....
Posted by Unknown at 11:15